The detection of areas in which the risk of a particular disease is significantly elevated, leading to an excess of cases, is an important enterprise in spatial epidemiology. Various frequentist approaches have been suggested for the detection of “clusters” within a hypothesis testing framework. Unfortunately, these suffer from a number of drawbacks including the difficulty in specifying a p-value threshold at which to call significance, the inherent multiplicity problem, and the possibility of multiple clusters. In this paper, we suggest a Bayesian approach to detecting “areas of clustering” in which the study region is partitioned into, possibly multiple, “zones” within which the risk is either at a null, or non-null, level. Computation is carried out using Markov chain Monte Carlo, tuned to the model that we develop. The method is applied to:

The SpatEpi package contains data and code for spatial epidemiology: 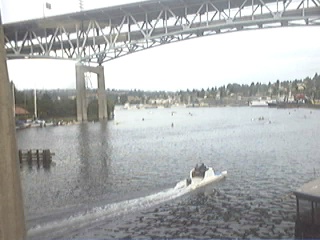 We consider the problem of detecting changes in a multivariate data stream. A change detector is defined by a detection algorithm and an alarm threshold. A detection algorithm maps the stream of input vectors into a univariate detection stream. The detector signals a change when the detection stream exceeds the chosen alarm threshold. We consider two aspects of the problem: (1) setting the alarm threshold and (2) measuring/comparing the performance of detection algorithms. We assume we are given a segment of the stream where changes of interest are marked. We present evidence that, without such marked training data, it might not be possible to accurately estimate the false alarm rate for a given alarm threshold. Commonly used approaches assume the data stream consists of independent observations, an implausible assumption given the time series nature of the data. Lack of independence can lead to estimates that are badly biased. Marked training data can also be used for realistic comparison of detection algorithms. We define a version of the receiver operating characteristic curve adapted to the change detection problem and propose a block bootstrap for comparing such curves. We illustrate the proposed methodology using multivariate data derived from an image stream.

Link to data used for above method: manually tagged images of boat traffic underneath the University Bridge in Seattle WA.